Our available project engineer’s and design staffs are seasoned Communications experts and can assist throughout the development process. We have available RCDD’s (Registered Communications Distribution Designer’s) that can work with clients to deliver quality installation plans.

Cabling systems that we design are based upon the latest standards for scalability and future technologies. We believe in the numerous benefits of a standards based solution offers, but we are also fully aware that some situations require created solutions and variances in industry standards to facilitate the customer’s best interest.

In all cases, we can design a cabling system that is right for your organization. We will work hand-in-hand with your internal engineering teams and equipment. Manufactures to ensure the correct solution is delivered. 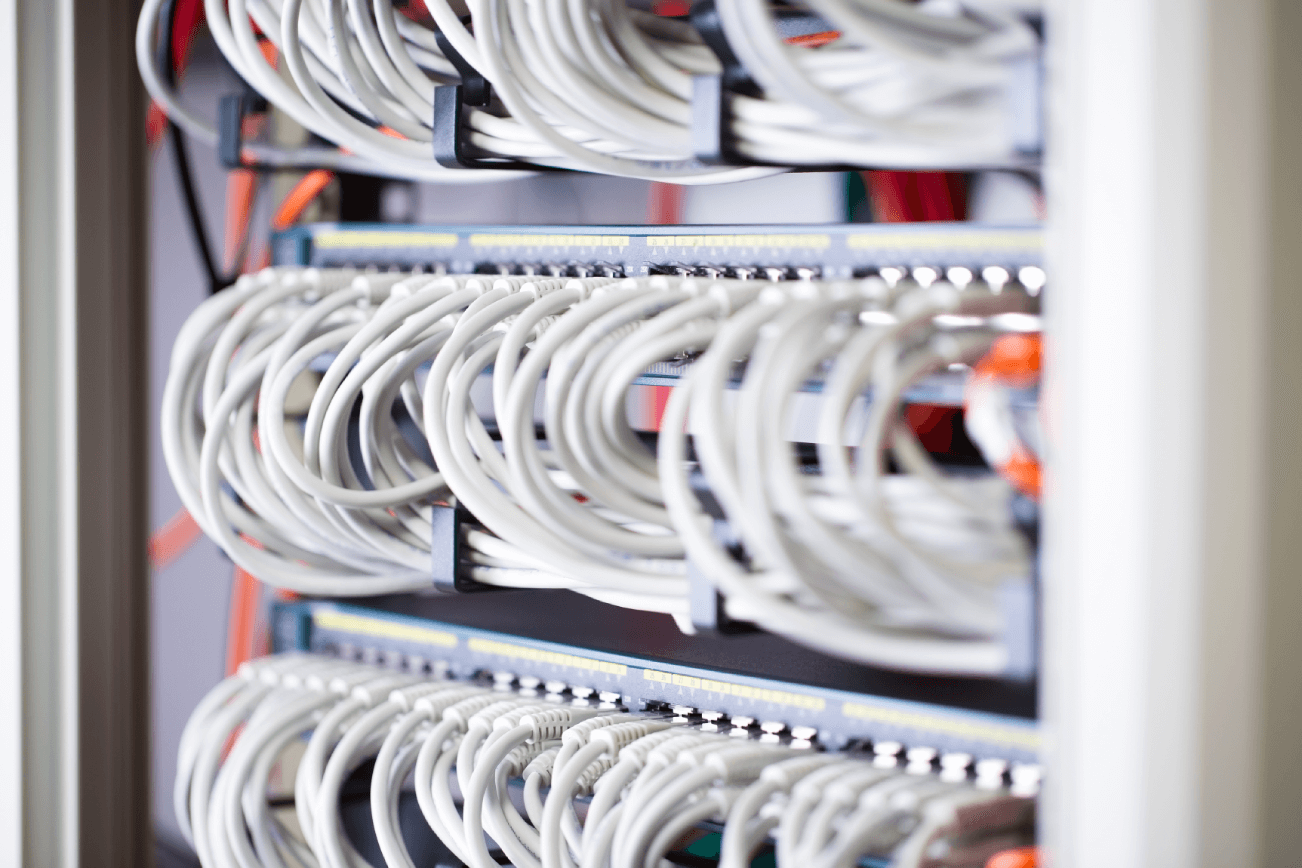 Absorption (Fiber Optic) - One cause of fiber optic attenuation where light signal is absorbed into the glass during transmission.

American Wire Gauge (AWG) - A U.S. standard set of non-ferrous wire conductor sizes. Typical data wiring is AWG number 24, 26 or 28. The higher the gauge number, the smaller the diameter and the thinner the wire.

Analog Signals - Signals that are continuously varying in level are said to be analog.

Attenuator - A device used to attenuate a signal.

Back Reflection (Fiber Optic) - A measure of the light reflected off the polished end of a fiber connector. Measured in negative db relative to incident power.

Backshell (Hood) - A mechanical backing that is sometimes put onto a connector. The device protects the conductors and can be assembled or injection molded. Commonly used with D-Sub connectors.

BALUN - An acronym for BALanced/UNbalanced. A device commonly used to change one cabling media to another (ex. coaxial to twisted pair balun).

Bandwidth - The difference between the upper and lower usable limits of a band of frequencies.

Baseband Transmission - A transmission method where direct current signals are placed directly onto the transmission medium (cable). Ethernet is a baseband network type, hence, the "Base" in 10Base-T, etc.

Baud Rate - A measure of signal changes per second. Commonly used to rate the speed of a modem.

Buffer (Fiber Optic) - The protective coating over the fiber.

Bus - Also called a "Daisy Chain". A network topology where each node is connected to one another in line. A major disadvantage is that when there is a break in the bus the entire network goes down.

Cable - A set of insulated wires or conductors within an extruded jacket. Many types of cable utilize shielding around the wires and under the cable jacket.

Cable Assembly - A piece of cable that has been terminated with one or more connectors.

Center Conductor - The solid or stranded wire in the middle of the coaxial cable. The conductor diameter is measured by the American Wire Gauge (AWG).

Chroma - The color portion of a video signal "C".

Client Server - A network architecture where multiple user workstations (Clients) communicate with backend servers through a network. Clients are fully operating systems that are capable of processing data.

Coaxial Adaptor - A device used to change one connector type to another or one gender to another (ex. BNC to SMA Adaptor).

Coaxial Cable - A two conductor cylindrical transmission line typically comprised of a center conductor, an insulating dielectric material and an outer conductor (shielding). Coaxial cable can be flexible (typical to the assemblies found in this catalog), semi-rigid or rigid in nature.

Coaxial Connector - The interconnection device found at each end of a coaxial cable assembly. There are many common types of coaxial connectors such as: BNC, SMA, SMB, F, etc.

CODEC - An acronym for COder/DECoder. A device used for converting analog signals to digital signals.

Composite Sync - A combination of horizontal and vertical sync pulses.

Conduit - Circular raceway that cable is run inside. Conduit requirements are specified under appropriate electrical code.

Connector - An electromechanical coupling device that provides an electrical interface that can be mated and unmated.

Contact - The specific points of contact within a connector. Contacts can be male (pins) or female (sockets).

Contact Resistance - Resistance is basically the opposition to electron flow in an electrical circuit and connector manufacturers strive to attain the lowest amount of resistance possible for each contact. Contact resistance is the cumulative resistance value for mated contacts.

Converter - A device used to convert from one transmission media to another (Ex. Fiber/Copper Media Converter). Converters are usually externally powered as they physically "repeat" or regenerate the signal.

Crimping - A means of securing an electrical contact to a wire using tools that compress the metal contact around the wire.

Cross Connect - The connection method used between permanent cabling (inside the walls) and equipment. A patch cord is often used as the connection means.

db - A logarithmic unit of measure where 3db represents a doubling or halving the power level from a given starting point.

DDC - (Data Display Channel) is a standard that defines communication between a monitor and a host system.

Demarcation Point - The point at which operational control changes (for example, where the phone company's responsibility ends and the building owner's begins).

Dielectric - The insulating material that separates the center conductor and the shielding.

Drawing - The mechanical process of making conductors smaller by forcing through dies.

Drop - Slang term used for each cabling span pulled from a telecommunications closet.

Ethernet - The most common of the network standards established in the early 1980's by the IEEE committee under standard 802.3

Extrusion - The mechanical process of coating a wire or group of wires with insulating material.

Frequency - The number of times a periodic action occurs in one second. Measured in Hertz.

Fusion Splice (Fiber Optic) - A permanent splice where the two fiber ends are welded together.

Ground Wire (Drain Wire) - An extra conductor (usually a bare wire) added to a cable for connection of the grounding path.

Horizontal Wiring - The span of cabling and connectors between the wiring closet and each drop. It is called horizontal because this type of wiring does not go up or down any floors of a building.

Hub - A network device that receives a signal from one station and retransmits to all other connected stations.

Impedance - The opposition to the flow of alternating or varying current. Measured in Ohms.

Insertion Loss - The attenuation caused by the insertion of a device (such as a splice or connection point) to a cable.

Insulation - A material with very high resistivity used to protect conductors. Insulation is usually extruded over the wire or conductor after the drawing process.

Insulation Displacement Contact - A means of terminating wires without the need of stripping down to the bare wire.

Loss Budget (Fiber Optic) - The maximum amount of power that is allowed to be lost per optical link.

Luma - The brightness portion of a video signal ("Y").

Mandrel - A fiber wrapping device used to cause attenuation within a fiber cable.

Modular Jack - The female connector used at the end of each horizontal cabling drop. Usually Modular Jacks utilize a 6 or 8 contact modular plug (on the patching side) and a 110, Krone, or other Insulation Displacement connection method (on the permanent horizontal wiring side).

Modular Plug - The male connector usually found at the end of a patch cord.

Multimode - A type of fiber optic cable where the core diameter is much larger than the wavelength of light transmitted. Two common multimode fiber types are 50/125 and 62.5/125.

Network Interface Card (NIC) - Network devices that are installed in computers so that they can be connected to a network. Ethernet NICs come in different speeds as well as with connections to different media types.

Node - A device or station connected to a network.

Patch Cord - A cable assembly with modular plugs on each end. Used for patching equipment to the patch panel in the equipment room and also used to connect to phones and computers at the drop.

Patch Panel - The common cross connect method used inside an equipment room. Typical Patch Panels utilize 110 or Krone connectors (on the rear) to connect to the horizontal cabling and modular jacks on the front to connect to equipment via patch cords.

Peer to Peer - A network architecture where computers connect directly with other computers without the need for servers.

Pixel - A single point on a display.

Plug - A popular term for a male gender connector of varied types.

Redundancy - Utilizing multiple access methods so that if one goes down the systems still operate.

Refresh Rate - Also referred to as scan rate. It is the number of times in one second (Measured in Hz) that the electron beam travels across the screen horizontally from one scan line to the next.

Repeater - A network device that regenerates the signal to increase a cabling run.

Resolution - The density of pixels in a given area typically expressed as the horizontal x vertical values, (ex. 640x480).

Return Loss - The ratio of the power launched into a cable and the power of the light returned down the fiber. This measurement is expressed in positive decibel units (db). A higher number is better. Return Loss = 10 log (incident power/returned power).

Ring - A network topology where nodes are connected in a ring. Used in Token Ring and SONET networks.

Router - A network device that interconnects networks. Routers provide traffic control and filtering functions, they are commonly used to connect a LAN to the Internet.

Scattering (Fiber Optic) - Scattering occurs when light collides with individual atoms in the glass. This is one of several causes of attenuation.

Server - A computing device that provides a service to users on a network (clients). An example is a file server that stores and maintains documents for retrieval.

Singlemode - A type of fiber with a small core that allows only one mode of light to propagate.

Small Computer System Interface (SCSI) - A peripheral interface that is used to connect devices to a computer.

Soldering - A means of securing an electrical contact to a wire by heating a low alloy of tin and lead also known as "solder".

Solid Wire (or Conductor) - One strand of wire. Usually less flexible, lower in cost and lower in resistance than stranded wire of the same AWG. Solid wire is typically used in permanent installations where flexing does not occur.

Star - The most common network topology where each node is connected to a central point. This topology is preferred as the network continues to function even if one or more nodes are damaged or disconnected.

Strain Relief - A method of protecting the wire to contact point from flexing or pulling.

Stranded Wire (or Conductor) - Multiple small AWG strands of wire that are put together to make a flexible wire with similar electrical properties as a similar solid wire. Stranded wires are usually used in data cabling.

S-Video - A video signal that separates the "Y" or Luma and "C" or chroma information.

Switch - A switch is a multiport bridge that segregates different portions of a network for faster network access.

Termination (Mechanical) - The process of installing a connector onto a fiber or copper cable.

Token Ring - A networking standard that utilizes a ring topology. Information is put onto the ring which is then passed (Token Passing) to the different stations. The amount of time that a station possesses the token is variable which gives some users priority on the network. Token Ring was standardized by IEEE under the 802.5 standard.

Transceiver - A device used to change one media type to another. Transceivers usually get their power from the NIC.

Twinaxial - An offshoot from coaxial cabling. Two center conductors with one dielectric and braided shielding.

Twisted Pair - Two insulated conductors twisted at a fixed rate of twists per unit of length, typically used in balanced circuits where nominal impedance and crosstalk are critical.

Wide Area Network (WAN) - A network that spans a greater distance and needs the involvement of a public carrier.

Wire - A conductive material (typically copper) that has been drawn down to a specific size and is then coated with an insulating material. A "bare wire" utilizes no insulator coating.